Let’s take a look at balls with regards to one day and test cricket. I’ll discuss the international specifications and design, what are they made of, and why are there different colour balls. 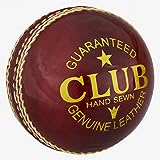 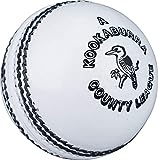 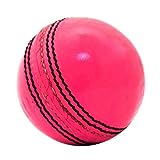 There are a number of cricket ball producers around the world but only a limited number are approved to provide balls for the professional game. Among these are Kookaburra which is an Australian brand first only used by the Australian Cricket Board. These days, Kookaburra balls are most commonly used in ODI, T20 and test matches in Australia and most other cricket playing nations.

There are two notable exceptions to that general rule: In England, games are played at all professional levels using the Dukes cricket ball. Meanwhile, in India, the SG ball is used more commonly.

It’s interesting to note the Dukes cricket ball is in fact the oldest manufactured cricket ball, previously owned and manufactured by the Duke Family, and now by the British Cricket Balls Limited. The balls are all similar as they have to conform to the overall laws governing their size and weight. One difference with the Kookaburra ball concerns its seam which has a tendency to deteriorate after around 20 to 30 overs. It can, therefore, stop swinging quite early and it can be difficult for the spinners to grip.

In contrast, the seam on the Dukes ball lasts for longer and it is a preferred option for seam and swing bowlers. Finally, the SG ball is almost exclusively used in India. It loses its shine fairly quickly and, for that reason, spinners prefer the ball while seamers get little benefit from swing.

Clearly, no game of cricket can take place without a ball and this is an essential piece of equipment. The cricket ball carries an intricate design and, with its seam in place around the circumference, it isn’t entirely spherical.

While cricket has those differences in terms of colour and manufacturer, every match ball has to comply with certain specifications. For those who are practising or learning the game at junior level, there are exceptions but, in a match situation, all balls have to follow the relevant law. 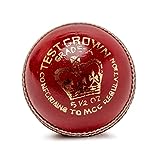 The red ball was the original ball and, for decades, it was the only type of ball in use for all matches. In the modern day, red balls are now solely used for daytime first class and test cricket.

The manufacturing starts with that cork centre, followed by tightly bound string and the dyed red leather casing. Red balls generally tend to be more durable and their contrasting colour makes them easier for umpires and players to spot them. The white cricket ball is now in use for all limited overs matches around the world. Whether it’s a one day 50 over match or a Twenty20 contest, the white ball is in official use. Originally, white balls were brought in for one day games which were played under floodlights as they were easier to see than the traditional red.

In time, things have changed and white leather balls are now used for all limited overs matches, irrespective of the time of day at which they are played.

The manufacturing process for white balls is exactly the same as the red versions but white cricket balls actually tend to behave differently. Early in a match, there can be a tendency for the white balls to swing more but this phenomenon quickly starts to disappear. White balls can also deteriorate more quickly and, after around 30-40 overs, they can become discoloured and difficult for players to see.

For these reasons, a rule change came into force relating to ODI cricket. The fielding side now has two new balls at the start of the 50-Over innings. Those balls are to be split between each end and are retained by the square leg umpire when not in use. The newest addition to the list of official cricket balls is the pink ball. This is now in general use for test matches and first class games which are played on a day/night basis.

Day night test cricket had been trialled since 2009 at first class level while the first ever test match to be played under these conditions took place in 2015. These games start in daylight but are scheduled to progress through dusk and into the night, under floodlights.

Cricket’s governing body needed to make a decision regarding the colour of the ball. It was decided that the players would wear traditional white clothing during day night test matches so that ruled out the use of a white ball. Use of the red ball was also unacceptable as it was difficult for fielders, batsmen and spectators to see the ball in night time conditions. As an effective compromise, a pink ball was devised. It’s a very bright pink and can therefore be seen at all times of the day. In addition, it’s also a neutral colour and won’t clash with any clothing worn by the players and umpires.

A pink ball is more durable than a white ball and that combination of durability and visibility makes them a perfect option for those day night test matches.

What Are Cricket Balls Made Out Of?

Professional, quality cricket balls are so hard that they are even capable of injuring the players (hence batters and wicketkeepers use guards). The question is what are these balls made out of?

Balls used in international cricket are made of a sphere of cork that is the inner core, while around this, string is tightly woven and a leather casing is applied all around the ball. Although cricket balls are a surprisingly simple construction, the manufacturing process is slightly more complicated than that.

Why Do Cricket Balls Have a Seam?

As discussed above, the seam on the cricket ball is the circular stitching itself which unites the two leather halves. The seam is raised compared to the smooth surface of the leather, and thus it can deviate the ball’s path when pitching. Seam bowlers harness this property of the cricket ball intentionally.

What Is The Weight and Size of a Cricket Ball?

In regards to weight and size, cricket balls will differ depending on age groups. The following lists the relevant weight and size specifications as of 2021.

For much younger players, it’s recommended that a plastic ball or one of the training balls which are covered later in this section, is used.

How Much Does a Cricket Ball Cost?

All cricket matches need a ball but there is so much more to manufacture than just producing a leather sphere. The very process of manufacturing a ball is an intricate and complex one and all balls must meet those exact specifications.

The development of the sport has also led to that choice of colours. The traditional red ball was used for centuries but innovations in limited overs and night time cricket has seen the white and pink balls added to the list.

In a match situation, all balls are fairly uniform irrespective of their colour. There are those specifications relating to weight and circumference which are to be followed and enforced by the match officials.

Meanwhile in training scenarios, there are many balls in use which can be used for practise matches or to train on certain aspects of the game. When anyone purchases a new cricket bat, there is a desire to get out onto the field and use it as soon as possible. It…